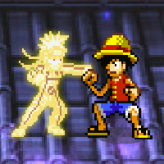 Summon your favorite anime character and step into the fray in this awesome action packed anime brawling mash up game – Anime Fighting Fury. Unleash your ultimate skill and see how characters would match up against each other!

Anime Fighting Fury (Bnobdsy) is an unofficial anime character fighting mash up featuring characters from various popular anime like Naruto, One Piece, Fairy Tale, Bleach, Samurai X, Hunter X Hunter, Hitman Reborn, and more. The game also features a 2 players versus mode among others. The game is not translated to English, but you can figure out which option does what by just clicking on them. Have fun.