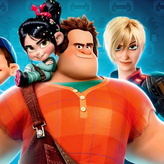 Get ready for some classic action with a modern look in this fun game adaptation of the funny 3D animated film - Wreck-It Ralph! Go game jumping and enter the universe of Hero's Duty, Fix-It Felix Jr game, Sugar Rush and more in this fun adventure platformer game!

Wreck-It Ralph is an action adventure platformer 3D video game based on the film of the same name. The game takes place after the events of the film and features Ralph wrecking things once again as per his nature. The game features many of the characters from the film including Fix-It Felix Jr., and Princess Vanellope. One of the game's main feature is the inclusion of many high-quality cut scenes that make the game alive.

Play Wreck-It Ralph game online in your browser free of charge on Arcade Spot. Wreck-It Ralph is a high quality game that works in all major modern web browsers. This online game is part of the Adventure, Action, Emulator, and Nintendo DS gaming categories. Wreck-It Ralph has 111 likes from 137 user ratings. If you enjoy this game then also play games Wreck-It Ralph: Fix-It Felix Jr and New Super Mario Bros.. Arcade Spot brings you the best games without downloading and a fun gaming experience on your computers, mobile phones, and tablets. New arcade games and the most popular free online games are added every day to the site.