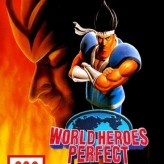 A new and final world heroes tournament is being held! Settle the score against other players and find out who is the best fighter in the world in World Heroes Perfect! Use the new special moves and the stronger version of the desperation moves to catch your enemy of their guards.

World Heroes Perfect is a 1995 fighting arcade game for the Neo Geo arcade system, and is a sequel to the 1994 World Heroes 2 Jet. World Heroes Perfect is also the final title of series. The game features 16 characters, 2 mini boss, and one final boss – Neo Dio. Each character of the game has the traditional four-button attack layout with available button combos. The game also features new and modified moves, as well as fighting statistics for each character.