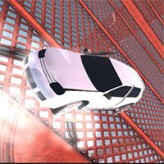 Put yourself to the ultimate test as you play this extra challenging platformer game filled with tricks called Unfair Sonic! Experience all the new acts and levels with an extremely unfair layout that trolls the players. Don't always believe what you see, as the game will just be messing with you. Have fun.

Unfair Sonic, also known as Sonic Unfair, is a fan-made Sonic game that is quite popular because of its ridiculous difficulty that is very unfair to the player. At its core, the gameplay is akin to your traditional Sonic game where the player must take Sonic the Hedgehog across the entire area to reach the far end safely. However, unlike the traditional game it is based on, the level layout of Unfair Sonic features tons of traps, collapsing bridges, Robotnik boxes, and other gizmos that will trick the player and prematurely end the stage. The game also has a much more simple game mechanic, in which Sonic must acquire only one gold ring located at the end of the stage, and the only counter shown is the number of times Sonic died. In fact, dying in this game is quite normal, so expect to reach double digits in the counter. Try your best to make it through all the stages.

Play Unfair Sonic game online in your browser free of charge on Arcade Spot. Unfair Sonic is a high quality game that works in all major modern web browsers. This online game is part of the Funny, Platform, Tricky, and Challenge gaming categories. Unfair Sonic has 7 likes from 9 user ratings. If you enjoy this game then also play games Sonic Unfair and Unfair Mario. Arcade Spot brings you the best games without downloading and a fun gaming experience on your computers, mobile phones, and tablets. New arcade games and the most popular free online games are added every day to the site.