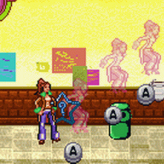 Raven is back in an all new adventure! Join her as she uses her psychic abilities to glimpse the future in That’s So Raven 2 – Supernatural Style! Immerse yourself into American high school life and join the gang that literally runs the show!

That’s So Raven 2 – Supernatural Style is a cartoon style platformer adventure game based on the Disney TV series. Released back in 2005 for the Game Boy Advance hand held system (GBA), This game is the second video game in the That’s So Raven video game series, and the second game in the series. In this game, Raven is heading to a fashion show, but she ends up running late. Help her find the accessories needed to complete her fashion line.