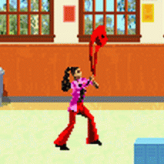 Follow the magical girl Raven as she embarks on a quest to prevent mayhem from happening in this action platformer puzzle video game – That’s So Raven! Dress up Raven with the best outfit you can find and afford! Good luck!

That’s So Raven is a side-scrolling video game based on Disney Channel’s TV series with the same name. The game was released back in 2004 for the Game Boy Advance and is based on the four cool episodes from the TV series. In this game, you will play as the beautiful and magical Raven as she uses her psychic premonitions to avoid problems and prevent complete mayhem. Hit the hallways, Pizza Palace, the Carnival and even a hair salon! Have fun!

Play That's So Raven game online in your browser free of charge on Arcade Spot. That's So Raven is a high quality game that works in all major modern web browsers. This online game is part of the Adventure, Platform, GBA, and Girl gaming categories. That's So Raven has 1 likes from 1 user ratings. If you enjoy this game then also play games That's So Raven 2 - Supernatural Style and Sonic 3 Complete. Arcade Spot brings you the best games without downloading and a fun gaming experience on your computers, mobile phones, and tablets. New arcade games and the most popular free online games are added every day to the site.