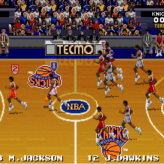 Play with the best basketball teams from 1992 and join the basketball superstars like Michael Jordan and Reggie Lewis in Tecmo Super NBA Basketball! Play with updated rosters, lots of improvements, and even under a new gaming engine of Super NES! Have fun!

Tecmo Super NBA Basketball is a basketball Sports simulation video game and is a sequel to the Tecmo NBA Basketball. The game was released back in 1992 for the Super Nintendo Entertainment System (SNES) and features NBA teams from 1992. The game features many game seasons that you can play including exhibition mode, 1992 All-Star Game, and 1993 season games. This game is also one of the games for the 16bit gaming era that allows players to watch every single game that takes place.