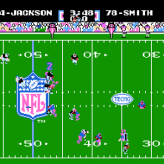 Play with real NFL teams and use real NFL players of 1990-91 NFL season in this classic retro football game – Tecmo Super Bowl! Play this fast-paced football simulator with all 28 teams from the National Football League circa 1991.

Tecmo Super Bowl is a classic sports video game released for the Nintendo Entertainment System (NES) back in 1991. In this game, the player is provided with options for NFL Preseason, Season Game, and Pro Bowl play. The game was the very first game to have licensing privileges with both the league of National Football and National Football League Players Association, thus allowing the game to use real names and attributes of the players and teams. In addition, the game features full-length 1991 NFL regular season schedule and play-off format.

Play Tecmo Super Bowl game online in your browser free of charge on Arcade Spot. Tecmo Super Bowl is a high quality game that works in all major modern web browsers. This online game is part of the Arcade, Sports, Emulator, and NES gaming categories. Tecmo Super Bowl has 5 likes from 6 user ratings. If you enjoy this game then also play games Tecmo Super NBA Basketball and Tecmo NBA Basketball. Arcade Spot brings you the best games without downloading and a fun gaming experience on your computers, mobile phones, and tablets. New arcade games and the most popular free online games are added every day to the site.