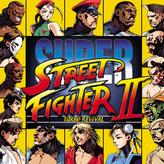 Choose your favorite fighter, master his or her moves, and defeat all of your opponents in this awesome old-school fighting video game – Super Street Fighter II Turbo: Revival! Unlock the strong character Shin Akuma and unleash his devastating moves!

Super Street Fighter II Turbo: Revival is a fighting video game and a port of the Super Street Fighter II Turbo for the Game Boy Advance (GBA) handheld system. Released back 2001, the game features an all new title screen, character illustrations, different button mapping, new techniques, and more. Although considered as a port, the game has many improvements and features that it is worth playing even after you’ve played the original. The game also features exclusive remixes as well! Have fun!