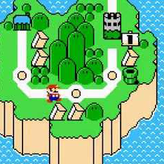 The original Super Mario World was released back in 1990 for the Super Nintendo Entertainment System. However, back in 1995, a group called Hummer Team created a port of the popular game to the NES. The team managed to retain many elements of the original including Yoshi and many sprites. However, because of the limitation of the NES hardware, the game features many drawbacks including some missing levels, nonsensical physics, bad music, and so much more. However, the game is still very fun to play. If you enjoy the original game, then the Super Mario World NES version is worth trying. Have fun!

There have been 7 likes from 12 votes on this game.