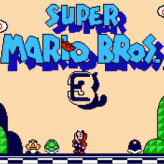 Mario back at it again, saving the world. Super Mario Bros 3 Challenge is a side-scrolling game taken from the Super Mario 3 Game. Hearing a call from Princess Toadstool, Mario and Luigi jump into action.

Brought into Seven worlds to fight the evil bowser. Our heroes enter the pipes leading to the Mushroom Kingdom and find out that it's Bowser’s Handiwork. Ten years have passed, and the brothers are back in a place they have not visited for a long time, The Grasslands. With all those time in his hands, Bowser has beefed up the security of the world. Some parts of the world have been changed, and you must keep an eye out for them. Places were power-ups, and additional lives have been removed. Additional hazards have been placed so the brothers would not be successful this time. Fortresses now have additional enemies that would up the difficulty of the game. Enemies specific to certain areas now show up in different places. This is a game for the most hardcore of Mario fans. Super Mario Bros 3 Challenge does not give you secret places to get flutes and be whisked away to a different world. You have to grind and defeat the Evil King Koopa the old-fashioned way, through sheer determination and your desire to save the princess. So ready yourself because our little hero is back at it again!