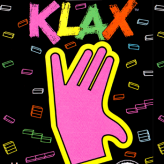 Catch the colored tiles that come down from the conveyor belt and line them up to earn some score in this old-school puzzle game – Klax! Figure out the best way to stack the tiles in this addicting puzzle game.

Klax is a classic puzzle arcade game released back in 1989 for the Sega Genesis/ MegaDrive home console. The objective of the game is to line up the colored blocks into rows of similar colors and make them disappear from the game field. As the game goes on, the tiles go down quicker and quicker until it is almost impossible to catch every tile. Try to score as much as possible before running out of room in this fun and addicting classic game.

Play Klax game online in your browser free of charge on Arcade Spot. Klax is a high quality game that works in all major modern web browsers. This online game is part of the Arcade, Puzzle, Emulator, and SEGA gaming categories. Klax has 1 likes from 1 user ratings. If you enjoy this game then also play games Marble Madness & Klax and Sonic 3 Complete. Arcade Spot brings you the best games without downloading and a fun gaming experience on your computers, mobile phones, and tablets. New arcade games and the most popular free online games are added every day to the site.