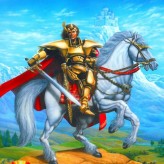 Control a group of heroes and commanders and accomplish your goals and objectives as efficient as possible in this old school tactical RPG – Warsong! Upgrade your heroes to improve their power and survivability!

Warsong is a classic tactical role-playing game released back in 1991 for the SEGA Genesis. Also known under the title of Langrisser, the game is the first in the series, and features a blend of tactical warfare and hero style control of Fire Emblem series, with the unit control of Famicom-Wars. The game is pretty brutal for new players as any hero or commander that dies will remain dead throughout the game. During the game, the player can slowly acquire ally leaders – each of whom can hire up to 8 units of soldiers. Have fun!

Play Warsong game online in your browser free of charge on Arcade Spot. Warsong is a high quality game that works in all major modern web browsers. This online game is part of the Strategy, Action, Emulator, and SEGA gaming categories. Warsong has 1 likes from 1 user ratings. If you enjoy this game then also play games Sonic Mania Edition and Ultimate Mortal Kombat Trilogy. Arcade Spot brings you the best games without downloading and a fun gaming experience on your computers, mobile phones, and tablets. New arcade games and the most popular free online games are added every day to the site.