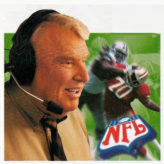 Play with popular NFL players like Dallas Cowboys and Erik Williams in this cool old-school football video game – Madden NFL 95! Use the all-new Madden-designed defenses with the ‘94-‘95 NFL game strategies and have fun!

Madden NFL 95 (also written as Madden NFL ’95) is a cool retro football video game that was released back in 1994 for multiple gaming consoles including the Game Boy and Super Nintendo Entertainment System (SNES). This game was the first to showcase no passing windows by default (although the option can be turned on using the options menu). The game features 3-D rendered player moves, 48 player rosters, 1994 NFLPA rosters, over a hundred player injuries, and so much more. Player stats are also tracked individually both in-game and throughout the season that became a standard on later versions.

There have been 17 likes from 17 votes on this game.

Play Madden NFL 95 game online in your browser free of charge on Arcade Spot. Madden NFL 95 is a high quality game that works in all major modern web browsers. This online game is part of the Arcade, Sports, Emulator, and SNES gaming categories. Madden NFL 95 has 17 likes from 17 user ratings. If you enjoy this game then also play games Madden NFL 07 and Madden NFL 2004. Arcade Spot brings you the best games without downloading and a fun gaming experience on your computers, mobile phones, and tablets. New arcade games and the most popular free online games are added every day to the site.