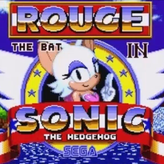 Replay the popular Sonic the Hedgehog game, not as Sonic, but as Rogue the bat! Get through the obstacles and complete the stages quickly in Rouge in Sonic 1! Play as the world-renowned treasure hunter Rouge and complete the game again.

Rouge in Sonic 1 is a ROM hack of the popular Sonic the Hedgehog game (a.k.a. Sonic 1) for the SEGA Genesis gaming console. This simple hack replaces the main character, sonic, with Rouge, an anthropomorphic bat with teal eyes, white fur, and endowed female features. This hack changes nothing else except for the sprite swap of Sonic and Rouge. However, this hack is well praised due to the detail and compatibility of its sprites. Rogue first appeared in Sonic Adventures 2 (2001) and has many cool abilities including flight, superkicks, and more. Unfortunately, this hack does not display the character's special traits and capabilities as she acts and functions just like the original Sonic character.

Play Rouge in Sonic 1 game online in your browser free of charge on Arcade Spot. Rouge in Sonic 1 is a high quality game that works in all major modern web browsers. This online game is part of the Arcade, Retro, Emulator, and SEGA gaming categories. Rouge in Sonic 1 has 4 likes from 4 user ratings. If you enjoy this game then also play games Pokemon Rouge Feu and Friday Night Funkin. Arcade Spot brings you the best games without downloading and a fun gaming experience on your computers, mobile phones, and tablets. New arcade games and the most popular free online games are added every day to the site.