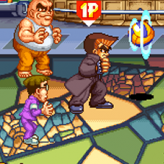 Play a brutal yet very fun dodge ball with punks and martial artists in this classic arcade game for the Neo Geo system – Super Dodge Ball! Pass the ball to your team mate and trick the opponent’s defenses. Strike your opponent when they are not on guard!

Super Dodge Ball is a classic fighting / dodge ball sports game created back in 1996 for the Neo Geo Arcade system, and is a sequel to the 1987 game of the same name. The rules are similar to the original arcade game where two teams battle each other out by hitting the characters on the other side with the ball. The game ends when all members on any of the team are eliminated. Each member has one captain and two teammates.

Play Super Dodge Ball game online in your browser free of charge on Arcade Spot. Super Dodge Ball is a high quality game that works in all major modern web browsers. This online game is part of the Arcade, Sports, Emulator, and Neo Geo gaming categories. If you enjoy this game then also play games Super Mario Bros. and Super Mario 64. Arcade Spot brings you the best games without downloading and a fun gaming experience on your computers, mobile phones, and tablets. New arcade games and the most popular free online games are added every day to the site.