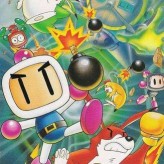 An evil Bomber with the power of Time freed various criminal Bombers from prison! Play the role of the White Bomber and capture them all in Super Bomberman 5! Will you be able to defeat them all and reach 100% map completion? Good luck!

Super Bomberman 5 is a classic 1997 video game released for the Super Nintendo Entertainment System (SNES) gaming console. Similar to the previous titles, this game features the traditional action puzzle and maze type gameplay that made the franchise popular. The game features a total of nine characters to choose from, and over 10 maps to play on. Unlike the previous titles, however, the story mode in Super Bomberman 5 is nonlinear, allowing the players a choice of which level they’d like to complete next.

Play Super Bomberman 5 game online in your browser free of charge on Arcade Spot. Super Bomberman 5 is a high quality game that works in all major modern web browsers. This online game is part of the Arcade, Action, Emulator, and SNES gaming categories. Super Bomberman 5 has 5 likes from 7 user ratings. If you enjoy this game then also play games Super Mario Bros. and Super Mario 64. Arcade Spot brings you the best games without downloading and a fun gaming experience on your computers, mobile phones, and tablets. New arcade games and the most popular free online games are added every day to the site.