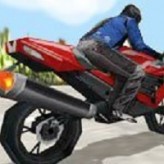 Race around the globe and compete against players from across the world! Crank up the gas and ride your super bike in this 3D racing game – Motorun! Race against computer racers and dash through the busy streets of the city. Explore 10 locations and get the high score!

Motorun is a fast-paced motorcycle racing game with 10 race tracks featuring real routes and landmarks from around the world including downtown San Francisco, the mountains of Northern Italy, and the busy streets of Las Vegas. Race against 8 AI opponents and try to get the first place. Try to beat the race as fast as possible and get the chance to be included in the world leader board and compete the time of the best players!

Play Motorun game online in your browser free of charge on Arcade Spot. Motorun is a high quality game that works in all major modern web browsers. This online game is part of the Racing, Arcade, Motorbike, and Challenge gaming categories. Motorun has 1 likes from 1 user ratings. If you enjoy this game then also play games Five Nights at Freddy's 2 and Five Nights at Freddy's. Arcade Spot brings you the best games without downloading and a fun gaming experience on your computers, mobile phones, and tablets. New arcade games and the most popular free online games are added every day to the site.