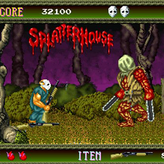 Be empowered by the terror mask and go on a rampage as you try to escape the house and save your friend in this gory horror-themed beat’em up arcade game – Splatterhouse! Defeat various monsters and abominations as you go deeper into the living house.

Splatterhouse is a very violent and gory classic arcade beat’em up slasher game following the story of two college students, Rick Taylor and Jennifer Wills. The game was first released in 1988 for the arcade system but was later ported to different gaming consoles including the TG16. The game features blood, gore, and suggestive theme that are not suitable for very young players. The game’s story, as well as the setting, are also very disturbing for the young minds.

Play Splatterhouse game online in your browser free of charge on Arcade Spot. Splatterhouse is a high quality game that works in all major modern web browsers. This online game is part of the Arcade, Action, Emulator, and TurboGrafx-16/PC Engine gaming categories. Splatterhouse has 2 likes from 2 user ratings. If you enjoy this game then also play games Splatterhouse 3 and Splatterhouse 2. Arcade Spot brings you the best games without downloading and a fun gaming experience on your computers, mobile phones, and tablets. New arcade games and the most popular free online games are added every day to the site.