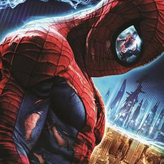 Follow both Spider-Man and Spider-Man 2099 as they battle villains after villains in hope of restoring the balance of time in Spider-Man Edge of Time! Will you be able to fix the timeline and restore everything back to normal? Good luck and have fun!

Spider-Man Edge of Time is an action-adventure superhero video game that was released for the Nintendo DS gaming system back in 2011. Although some Spiderman characters from the Spiderman multiverse are not available and not even features, the game is considered the sequel to 2010's Spider-Man: Shattered Dimensions. The game features similar gameplay to the previous game and has many mini-games and challenges. The game also features many upgrades for both the characters available - making them stronger as the story progresses.