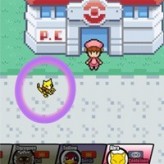 Complete various missions and explore the new Campo Region right in your browser! Travel the world of Pokemon in this fan-made flash game – Pokemon Campaign! Assume the role of a Pokemon and fight in real time!

Pokémon Campaign is a fan made browser flash game set in the Pokemon world. Just like any other Pokemon RPG, Pokemon Campaign features an open world game where you can take various missions! This game is unique as you will assume the role of a Pokemon during combat and not the trainer! The game also features real-time action combat making your skills in Pokemon battles really matter! Try to capture hundreds of Pokemons, train them, and battle various bosses and strong Pokemons! Have fun!

Play Pokemon Campaign game online in your browser free of charge on Arcade Spot. Pokemon Campaign is a high quality game that works in all major modern web browsers. This online game is part of the Action, Fighting, RPG, and Pokemon gaming categories. Pokemon Campaign has 1 likes from 1 user ratings. If you enjoy this game then also play games Pokemon Fire Red Version and Pokemon Emerald Version. Arcade Spot brings you the best games without downloading and a fun gaming experience on your computers, mobile phones, and tablets. New arcade games and the most popular free online games are added every day to the site.