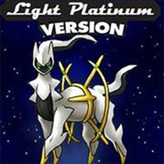 Become a Pokemon Master unlike any other in this popular Pokemon Ruby Hack! Explore the region of Zhery and battle the new Elite Four in Pokemon Light Platinum! Try to capture ALL Legendary Pokemons in this awesome game!

Pokemon Light Platinum is a popular Pokemon hack that features 3rd and 4th generation Pokemons as well as a number of Fakemons. The game takes place in a new fictional region called Zhery. The game features a new story, new rivals, new locations, and new challenges. The best part about this Pokemon hack, is you are able to capture all Pokemons from all previous regions, as well as all legendary Pokemons! There is also a final event called Pokemon World Championship where your mettle will be tested to the fullest!

There have been 59 likes from 63 votes on this game.

Play Pokemon Light Platinum game online in your browser free of charge on Arcade Spot. Pokemon Light Platinum is a high quality game that works in all major modern web browsers. This online game is part of the Adventure, RPG, GBA, and Pokemon gaming categories. Pokemon Light Platinum has 59 likes from 63 user ratings. If you enjoy this game then also play games Pokemon Fire Red Version and Pokemon Emerald Version. Arcade Spot brings you the best games without downloading and a fun gaming experience on your computers, mobile phones, and tablets. New arcade games and the most popular free online games are added every day to the site.