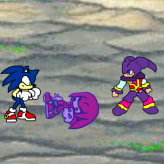 After the bunch defeated the huge monster and the gargoyle, Knuckles became cursed! Find out what happens next in Sonic RPG – Episode 4 – Part 2! Find a cure to Knuckle’s curse and overcome another challenge!

The continuation to Sonic RPG Episode 4 Part 1 is here! Being too big, this is the second part of the Episode 4 split. Enjoy the continuation of the story with the game’s new voice acting! After the fight against two strong monsters, Knuckles fell sick and was cursed. Find a way to cure Knuckles and take part on the role playing adventure! Battle monsters in a turn-based battle with Nights, Knuckles, Shadow, and Sonic. The game length of the second part of episode 4 is still pretty short but is a little bit longer than part 1.