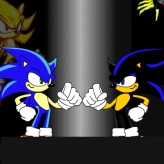 Join Sonic and his friends as they explore a new planet in the second episode of the fan-made Sonic role playing game – Sonic RPG – Episode 2! Embark on an adventure through the planet Herbegitan and find your way back!

Sonic RPG – Episode 2 follows the events of Sonic RPG – Episode 1 – Part 2. Sonic, Knuckles, Shadow and Seelkadoom were sucked by a portal to other dimension, and now they found themselves in a planet called Herbegitan. Just like in the previous episodes. Combats and battles are in turn-based. Pick the skills you want to use and make sure you have enough mana or skill points to use it. Win battles against various opponents found in the story and have fun.

Play Sonic RPG - Episode 2 game online in your browser free of charge on Arcade Spot. Sonic RPG - Episode 2 is a high quality game that works in all major modern web browsers. This online game is part of the Strategy, Action, and RPG gaming categories. Sonic RPG - Episode 2 has 7 likes from 7 user ratings. If you enjoy this game then also play games Sonic Mania Edition and Sonic 3 Complete. Arcade Spot brings you the best games without downloading and a fun gaming experience on your computers, mobile phones, and tablets. New arcade games and the most popular free online games are added every day to the site.