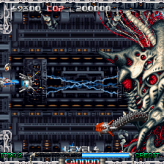 Destroy the invading Martians as the lone fighter pilot named Dino246. Use charged fire to inflict great damage or rapid fire to eliminate many foes at an instant in Pulstar! Avoid alien lasers and incoming fire and try to finish all stages.

Pulstar is a classic shoot’em up space shooter and is the predecessor of Blazing Star. It was year 2248 when the first sign of extraterrestrial life is discovered coming from the planet Mars. A couple of years later, alien life forms began attacking the human race and the battle between the aliens and human race began escalating to the entire Solar system. The game is a side scrolling space shooter game with beautiful pre-rendered graphics and challenging gameplay. Can you complete all level?

Play Pulstar game online in your browser free of charge on Arcade Spot. Pulstar is a high quality game that works in all major modern web browsers. This online game is part of the Arcade, Shooting, Emulator, and Neo Geo gaming categories. Pulstar has 2 likes from 2 user ratings. If you enjoy this game then also play games Metal Slug and The King of Fighters '97. Arcade Spot brings you the best games without downloading and a fun gaming experience on your computers, mobile phones, and tablets. New arcade games and the most popular free online games are added every day to the site.