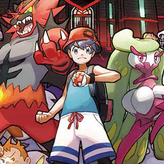 Travel to the well-known region with a brand new set of Pokemon from the first to the seventh generation Pokemon in this fun ROM hack - Pokemon Ultra Red.

Pokemon Ultra Red (also called Pokemon Ultra Red Infinity) is a Pokemon ROM hack based on the original Pokemon Fire Red Version for the Game Boy Advance handheld system (GBA). The game was published by username DarkFex. The game features Pokemon from the first to the Seventh Generation, a series of Mega Evolution, New sprites for most characters including the protagonist and the rivals, new set of graphics, modified coaches, ExSphare system from XY Pokemon game version, some mergers, Randomized Trainers and Pokemon, and so much more! Will you be able to complete another great journey to become the ultimate trainer? Good luck!

Play Pokemon Ultra Red game online in your browser free of charge on Arcade Spot. Pokemon Ultra Red is a high quality game that works in all major modern web browsers. This online game is part of the Adventure, Strategy, GBA, and Pokemon gaming categories. Pokemon Ultra Red has 127 likes from 137 user ratings. If you enjoy this game then also play games Pokemon Fire Red Version and Pokemon Emerald Version. Arcade Spot brings you the best games without downloading and a fun gaming experience on your computers, mobile phones, and tablets. New arcade games and the most popular free online games are added every day to the site.