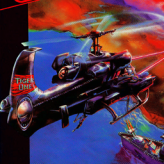 Take on hordes of enemies that include tanks, battleships, artilleries, and anti-air batteries. Shoot them all down with missiles in Tiger-Heli! Rain hell from above and bomb the enemies so your nation’s troops can advance.

Tiger-Heli is a classic vertical shooter game released for the arcades way back in 1985, and was ported to the Nintendo Entertainment System (NES). The game is a predecessor to Twin Cobra with similar gameplay. In this game, the player will take control of a combat helicopter known as the titular Tiger-Heli. Interesting enough, aside from the background of aircraft taking off, there are no flying enemies in this game, and you alone have air superiority! Blow away all of the enemies! Good luck and have fun!

Play Tiger-Heli game online in your browser free of charge on Arcade Spot. Tiger-Heli is a high quality game that works in all major modern web browsers. This online game is part of the Arcade, Shooting, Emulator, and NES gaming categories. Tiger-Heli has 1 likes from 1 user ratings. If you enjoy this game then also play games Super Mario Bros. and Legend Of The Blob Brothers 2. Arcade Spot brings you the best games without downloading and a fun gaming experience on your computers, mobile phones, and tablets. New arcade games and the most popular free online games are added every day to the site.