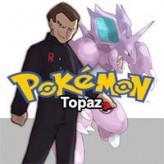 Tired of playing as the good guy? Why not join Team Rocket and capture all new Pokemons? Make Team Rocket Rich in Pokemon Topaz! Explore the region of Topaz and avoid the Pokemon police! Meet and capture 200+ super original Pokemons with a new story and map!

Pokemon Topaz is an amazing fan-made Pokemon hack / Overhaul where you play the role of the bad guys and join Team Rocket! Unlike other Pokemon games (and most RPGs), your goal in Pokemon Topaz is to eventually destroy the world! Capture rare Pokemons and make the gang rich! Pokemon Topaz features a new map, hundreds of new characters, a new story line, and 200+ (fake / original) pokemons!

Play Pokemon Topaz game online in your browser free of charge on Arcade Spot. Pokemon Topaz is a high quality game that works in all major modern web browsers. This online game is part of the Adventure, Strategy, GBA, and Pokemon gaming categories. Pokemon Topaz has 4 likes from 5 user ratings. If you enjoy this game then also play games Pokemon Fire Red Version and Pokemon Emerald Version. Arcade Spot brings you the best games without downloading and a fun gaming experience on your computers, mobile phones, and tablets. New arcade games and the most popular free online games are added every day to the site.