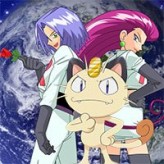 Become the next leader of the Team Rocket in this awesome classic Pokemon hack. Defeat your sister on a Pokemon Match in Pokemon Team Rocket Edition! Experience a new Pokemon adventure with the classic Generation 1 Pokemons!

Pokemon Team Rocket Edition (also known as Pokemon TRE) is a rom hack using the base game Pokemon Red for the Game Boy handheld system (GB). In this game, the team rocket leader Giovanni is having a competition to see who will become his successor in leading Team Rocket into the future. The competition boiled down between you and your sister, and in order to win, you must beat all of the gym leaders as well as the Elite Four. The game features new maps, new story, and even new sprites and tiles! Have fun playing!