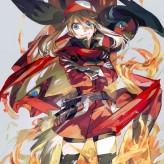 Take your Pokemon journey to the next level and defeat stronger opponents from all the leaders to the Elite Four in Pokemon Furious Flames! Cross paths with the pretty female character May and have fun!

Pokemon Furious Flames is a hack based on Pokemon Fire Red Version. The game features a more difficult overall gameplay, especially on the trainers, and contains Pokemon from Kanto, Johto, Hoenn, and more. The game features a total of 386 Pokemon that you can encounter and capture. Some rare Pokemon can only be captured on certain events so be sure to keep an eye out so you won’t miss them. This ROM hack also features new ways of evolving Pokemon, new abilities, new trainers, and even new Pokemon types. Have fun!

There have been 23 likes from 27 votes on this game.