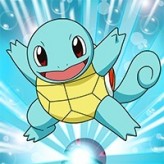 Get a blast from the past in one of the very first original Pokemon games! Take a walk on nostalgia lane in Pokemon Blue! Catch and collect 150+ Pokemons and explore the original Kanto region in this retro game!

Pokemon Blue (and Pokemon Red) is 1996 (1998 for English) RPG game and among the very first Pokemon titles in the series along with Red, Green, and Yellow. In this game, you have been finally granted a trainer’s license, and now it’s your time to head out to the world and be the next Poke League Champion! In the Blue version, you can catch a wild Growlithe! Will you be able to complete all Pokemons found in this version? Pokemon Blue has been awarded as the best selling RPG game of all time for the Game Boy Color.

Play Pokemon Blue game online in your browser free of charge on Arcade Spot. Pokemon Blue is a high quality game that works in all major modern web browsers. This online game is part of the Adventure, RPG, GB, and Pokemon gaming categories. Pokemon Blue has 221 likes from 242 user ratings. If you enjoy this game then also play games Pokemon Fire Red Version and Pokemon Emerald Version. Arcade Spot brings you the best games without downloading and a fun gaming experience on your computers, mobile phones, and tablets. New arcade games and the most popular free online games are added every day to the site.