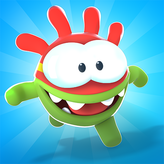 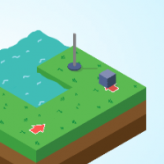 Our cute little frog is back, and this time, he's using his legs to run a mile. Play a cutesy endless runner game with Om Nom and his friend Om Nelle in Om Nom: Run.

The little frog is back to run this skill game combined with running. Control Om Nom as he tries to get to the end line. Collect coins and get three stars for each level. Earning more coins as you collect them gives you the chance to buy your different hero outfits for him to look more dashing. Two additional costumes are available, so keep an eye out for those coins. In this running game, you must guide the little from by achieving each of the goal’s levels. They vary in the challenges and adds more novelty to the game. Gain 400 meters or collect several coins. The challenges will keep you on your toes. Avoid signposts or oncoming traffic. Cop cars are aplenty as they try to stop you from reaching your goal. Guide Om Nom’s girlfriend as well as she makes an appearance on other levels. Om Nom: Run is a helter-skelter game that tests your coordination and how quickly you can avoid obstacles and other barriers to getting the highest score. Once you get the hang of it, there is no stopping you from collecting all those gold coins and spending them on better threads and even better scores. Guide this little Froggie home! Lace them sneakers and see Om Nom Run!

Play Om Nom: Run game online in your browser free of charge on Arcade Spot. Om Nom: Run is a high quality game that works in all major modern web browsers. This online game is part of the Arcade, Skill, Mobile, and App gaming categories. Om Nom: Run has 2 likes from 2 user ratings. If you enjoy this game then also play games Sonic 3 Complete and Snow Bros: Nick and Tom. Arcade Spot brings you the best games without downloading and a fun gaming experience on your computers, mobile phones, and tablets. New arcade games and the most popular free online games are added every day to the site.