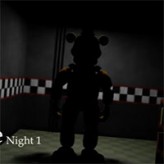 Play the role of an unlucky security guard and monitor the activities of the new animatronics for several nights in Night Shift at Freddy’s 2! Keep the advanced animatronics from damaging themselves, the diner’s properties, and you…

Night Shift at Freddy’s 2 is a fan-made horror simulation video game based on the very popular indie game Five Night’s at Freddy’s (FNAF) and was created by PsonProductions. In this game, the Fredbear’s Family Diner is looking for a new night shift security guard to work between 12 am and 6 am. The role of the guard is to monitor the cameras to ensure safety of the company’s properties and mascots. You are the new security guard, however, the danger is far from what you expect. Will you be able to survive the first week?

Instructions
– Download the file
– Unzip the file to an empty folder (or to the destination of your choice)
– Open the file Night-Shift-at-Freddy’s-2.exe
– Enjoy the game