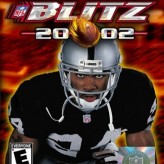 Play this fast-paced football ball game in NFL Blitz 20-02. Play an awesome game with no rules, no referees, and no mercy!

NFL Blitz 20-02 is an American football themed video game released for Game Boy Advance (GBA) back on 2001 and was published by Midway which features National Football League teams. In this game, you can choose and select from season mode and exhibition mode. In season mode, you will choose a single NFL team and you will handle them in a 17-week season, while the exhibition mode allows you to play a quick game by selecting one of the 32 teams available in the game. Unlike the American Football game, Blitz is played with fast-paced action without the rules applied in the real NFL games.

Play NFL Blitz 20-02 game online in your browser free of charge on Arcade Spot. NFL Blitz 20-02 is a high quality game that works in all major modern web browsers. This online game is part of the Arcade, Sports, Emulator, and GBA gaming categories. NFL Blitz 20-02 has 8 likes from 8 user ratings. If you enjoy this game then also play games Madden NFL 07 and NFL Blitz. Arcade Spot brings you the best games without downloading and a fun gaming experience on your computers, mobile phones, and tablets. New arcade games and the most popular free online games are added every day to the site.