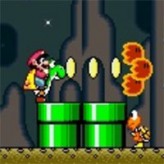 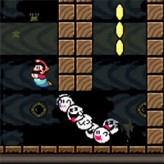 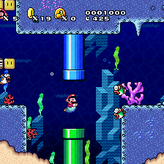 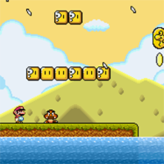 Princess Peach has been kidnapped once again! But this time, Bowser isn't the culprit. Rescue the Princess from the grasps of Wart in New Super Mario Land! Fight against new bosses at the end of each level. Find out their weaknesses and defeat them at their own game. Will you be able to successfully rescue Peach once again? Good luck and Have fun!

New Super Mario Land is a ROM hack of the popular Super Nintendo Entertainment System (SNES) game Super Mario World. In this game, Wart kidnapped Princess Peach in her castle and took her some place around the Mushroom Kingdom. Together with the dinosaur Yoshi, Mario must travel across strange lands to rescue the Princess and bring her back home safely.

This ROM hack features many things such as new custom power-ups, a new story line, challenging level layouts, cool Music, and more. The game has a length of 11 exits and is catered for veteran Mario platformer players who are up to a more challenging and fun levels. New Super Mario Land has a traditional gameplay with amped up challenges that are kept balanced by the new power-ups. All in all, the game is a cool take to the traditional gameplay that Mario players will love.

There have been 72 likes from 92 votes on this game.