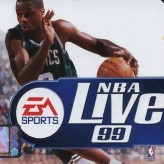 In the NBA, one of the most recognizable leagues for organized sports globally, 1999 was not a good year as this was a locked out induced season where players and management didn’t come into an agreement until the end of the year.

NBA Live 99, Play through the season with some of your favorite players from not so long ago. Experience the hype by playing as one of your favorites in a selection of 29 Teams. Choose from the West to The East, want to play casually? Then set the quarters for two minutes only. Want to experience the full length of an NBA game? How about twelve minutes per quarter. Play a full season with your favorite team, track stats, and improve your chances of winning that hardware. Looking for a casual game with your friends? The exhibition, don’t want to play the lockout-shortened Season, jump to the intensity and what players call the games that matter, The Playoffs, Three-Point Shootout will practice your sharpshooting skills beyond the arc with five racks to be the king from deep. Game Difficulty also comes in Arcade, Rookie, Starter, All-Star, and Superstar. Real NBA stats, players, and moves. Create a dynasty with multiple season wins, all new moves such as Jab steps, fake passes, and high flying dunks! Put that ball in the basket in NBA Live 99!

There have been 38 likes from 41 votes on this game.

Play NBA Live 99 game online in your browser free of charge on Arcade Spot. NBA Live 99 is a high quality game that works in all major modern web browsers. This online game is part of the Arcade, Sports, Emulator, and N64 gaming categories. NBA Live 99 has 38 likes from 41 user ratings. If you enjoy this game then also play games NBA Jam and Pokemon Pinball - Ruby & Sapphire. Arcade Spot brings you the best games without downloading and a fun gaming experience on your computers, mobile phones, and tablets. New arcade games and the most popular free online games are added every day to the site.