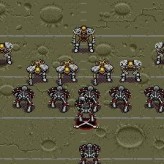 Go to a war like game of football with your monstrous troops. Choose the undead, the monsters, or the aliens in this fun and action-filled game – Mutant League Football! Play this funny yet violent take on the Madden Football formula introducing a different take and innovative design to the game.

Mutant League Football is an action sports game released back in 1993 for the Sega Genesis drive. The game is designed unsing Madden ’93 Engine and features many different take on football, that resembles more like a war than a sports game. The game takes place in a post-apocalyptic world where humans have long been mutated due to the radiation. This event caused the living to mutate, and the dead to rise again. There is also an alien invasion among all things.

Play Mutant League Football game online in your browser free of charge on Arcade Spot. Mutant League Football is a high quality game that works in all major modern web browsers. This online game is part of the Arcade, Strategy, Emulator, and SEGA gaming categories. Mutant League Football has 3 likes from 4 user ratings. If you enjoy this game then also play games Teenage Mutant Ninja Turtles: Turtles in Time and Teenage Mutant Ninja Turtles II - The Arcade Game. Arcade Spot brings you the best games without downloading and a fun gaming experience on your computers, mobile phones, and tablets. New arcade games and the most popular free online games are added every day to the site.