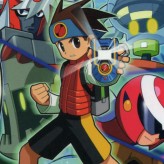 Play the role of Lan Hikari and attend in a tournament that will ultimately save the world. Collect powerful chips in Mega Man Battle Network 4 – Blue Moon. Use chip combo to perform more powerful attacks and defeat numerous foes!

When a giant asteroid is threatening the Earth, NAXA fired a beam of laser that will hopefully eliminate the space rock. Unfortunately the laser failed, but it revealed that the asteroid has a computer inside of it that seems to be controlling it. NAXA decided to create a tournament to determine the best Navi Driver and send it to re-calibrate the asteroid’s path. Play as Lan – a Navi user and his PeT Megaman, join the tournament to win and stop the asteroid! Mega Man Battle Network 4 – Blue Moon is the alternate of Mega Man Battle Network 4 – Red Sun.