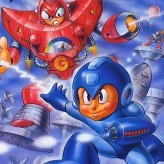 Dr. Wily is at it again! Play the role of Mega Man and use your mega blasters to defeat the evil Mavericks and their master in Mega Man 5! Will you be able to finish the game in one playthrough? Good luck and have fun!

Mega Man 5 is a classic action platformer video game that was released on multiple gaming consoles including the Nintendo Entertainment System (NES) in 1992. As the fifth game of the original Mega Man game series, this game features similar gameplay but with many improvements and game features. Taking place in the 21st century, this game's man antagonist, the mad scientist Dr. Wily, once again attempted to take over the world, and it's up to Mega Man to stop Dr. Wily and defeat all of his evil creations.

Play Mega Man 5 game online in your browser free of charge on Arcade Spot. Mega Man 5 is a high quality game that works in all major modern web browsers. This online game is part of the Arcade, Action, Emulator, and NES gaming categories. Mega Man 5 has 2 likes from 3 user ratings. If you enjoy this game then also play games Pokemon Omega Ruby and Pokemon Mega Emerald X & Y. Arcade Spot brings you the best games without downloading and a fun gaming experience on your computers, mobile phones, and tablets. New arcade games and the most popular free online games are added every day to the site.