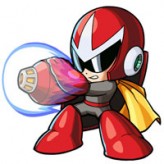 Protoman has been framed by the evil Dr. Wily! Play the role of Protoman and get out of the sticky situation in Mega Man 5: Protoman Edition! Use Protoman’s shield to deflect projectiles and collect all the letters to unlock new skills and the powerful Proto Dash!

Mega Man 5: Protoman Edition is a popular ROM hack of the game Mega Man 5 for the Nintendo Entertainment System. In this game, Dr. Wily has captured Mega Man and is framing Protoman for various crimes. Play the role of Protoman and save yourself by fixing the situation. The game not only replaces the Mega Man sprites with that of Protoman but also features a handful of fixes and improvements. Will you be able to finish the game? Good luck!