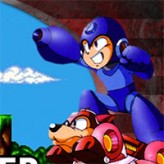 Ever wanted to play more of the classic game Mega Man 2? Then now is your ultimate chance! Prove your skills in Mega Man Wily’s Conquest 2: Hyper Edition Turbo! Fight the forces of Wily with more challenge, custom level design, and a lot more, with additional balancing and optimizations! Have fun!

Mega Man Wily’s Conquest 2: Hyper Edition Turbo! is a cool and popular ROM hack based on the original game Mega Man 2. This ROM has many features and changes from the original game including some increased speed in the Mega Buster, Wily Stage 4, a lot of new challenges on all and every stages, changed a lot of various weapon mechanics, change boss AIs and attack patterns, and so much more. Good luck!