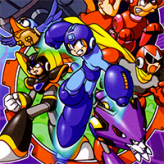 Play the role of Mega Man, Proto Man, Bass, or Duo and find and defeat all the scattered Mavericks in this action-packed game – Mega Man 2: The Power Fighters! Will you be able to beat the game will all of the characters and learn the story behind all the events? Good luck and have fun!

Mega Man 2: The Power Fighters is an action-packed fighting video game that was released back in 1996 for the Capcom Arcade system. Contrary to other Mega Man games with action-platformer gameplay, this game features a 1 on 1 fighting gameplay similar to other 2D fighting video games at the time. The game features 4 playable characters, each with their own epilogues once the player beats the game using the character.