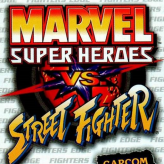 Two worlds collide, and only one world will emerge as victorious as the mightiest Marvel Superheroes are set to face the strongest Street Fighters in this action-packed 2D action fighting game for the PlayStation 1 - Marvel Super Heroes vs Street Fighter!

Marvel Super Heroes vs Street Fighter! 2D action fighting game released for the PlayStation 1 (PS1) gaming console in the year 1997. The game features a clash between Marvel superheroes against the Street Fighters on a one-on-one tag team matchup style. Select your fighters from a roster of a total of 17 characters, 9 of those are from the Street Fighter such as Ryu, Chun Li, and more, 8 characters are from the Marvel Comics such as fan favorites like Iron Man, Wolverine, Hulk, and more! It is up to you to decide which world will emerge victorious in this ultimate clash. Who would it be?