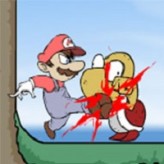 Mario just had enough! Join our angry plumber as he teach the baddies a lesson they won’t forget in this fun 2D side-scrolling brawler game – Mario Combat Deluxe! Fight against all the famous antagonists and enemies from the Super Mario Universe!

Mario Combat Deluxe is a side-scrolling 2D platforming and fighting video game based on the Super Mario Franchise. This game transforms the traditional platforming to a beat’em up game. Beat up various baddies and arch enemies and teach them a lesson! Show the world that Mario isn’t someone you should piss off! The game also features some slightly gory scenes, blood, and violent actions that may not be suitable for very young players and audiences. Good luck and have fun!

Play Mario Combat Deluxe game online in your browser free of charge on Arcade Spot. Mario Combat Deluxe is a high quality game that works in all major modern web browsers. This online game is part of the Action, Fighting, Funny, and Mario gaming categories. Mario Combat Deluxe has 8 likes from 9 user ratings. If you enjoy this game then also play games Super Mario Bros. and Super Mario 64. Arcade Spot brings you the best games without downloading and a fun gaming experience on your computers, mobile phones, and tablets. New arcade games and the most popular free online games are added every day to the site.