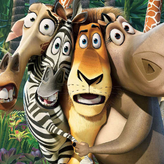 Play as the awesome and mighty Alex the Lion in this fantastic action-adventure video game based on the hilarious animated film of the same name – Madagascar! Take control of Alex, Marty, Gloria, Melman, or the crafty penguins in this funny game!

Madagascar is an action-adventure video game for the Game Boy Advance handheld system (GBA) based on the animated 2005 film of the same name. In this game, you must help the gang escape the zoo and follow their adventures to the wilderness of Africa. Run and jump through dozens of levels and solve various puzzles, and complete dozens of mini-games! Survive the wild and enjoy this cool adventurous game! Have fun!

Play Madagascar game online in your browser free of charge on Arcade Spot. Madagascar is a high quality game that works in all major modern web browsers. This online game is part of the Adventure, Action, GBA, and Anime gaming categories. Madagascar has 2 likes from 2 user ratings. If you enjoy this game then also play games Madagascar: Operation Penguin Adventure and Super Smash Flash 2. Arcade Spot brings you the best games without downloading and a fun gaming experience on your computers, mobile phones, and tablets. New arcade games and the most popular free online games are added every day to the site.