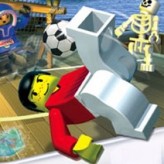 Play your favorite Sports with your favorite toys in LEGO Soccer Mania! Shoot around the pitch and score some sweet goal! Work your way to become the world Lego Soccer Champion by beating the champions and best players of Legoland!

LEGO Soccer Mania (also called Lego Football Mania outside the United States) is a fun LEGO themed soccer game where the player plays in the amazing world of Legoland. In this game, you can customize your mini figure / Lego characters as much as you want and play against cool teams. The game features amazing power ups and hilarious theme matches from the arid place of the Wild West to the crazy red planet Mars! The game also features four game modes to play on: Friendly, Adventure, Lego Cup, and Skill Zone.

There have been 16 likes from 17 votes on this game.

Play LEGO Soccer Mania game online in your browser free of charge on Arcade Spot. LEGO Soccer Mania is a high quality game that works in all major modern web browsers. This online game is part of the Arcade, Sports, Emulator, and GBA gaming categories. LEGO Soccer Mania has 16 likes from 17 user ratings. If you enjoy this game then also play games LEGO Indiana Jones Game and LEGO Star Wars: The Complete Saga. Arcade Spot brings you the best games without downloading and a fun gaming experience on your computers, mobile phones, and tablets. New arcade games and the most popular free online games are added every day to the site.