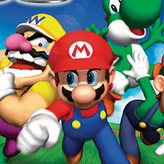 Embark on a journey with Mario and the gang to save Princess Peach from the evil grasp of the villain Bowser in Super Mario 64 DS!

Super Mario 64 DS is an adventure platformer video game for the Nintendo DS (NDS) gaming console, and was released back in 2004. The game begins when a forged invitation was set up by Bowser to capture Mario and his friends. Team up with Mario, Luigi, Yoshi and Wario to defeat the evil Bowser and his minions and save Princess Peach! Power them up by collecting coins, caps, and power flowers! The game has three endings: one main ending and two alternative endings. The game features a single player mode, a mini-game mode, a training mode, and a multiplayer mode. Good luck!

There have been 6 likes from 9 votes on this game.

Play Super Mario 64 DS game online in your browser free of charge on Arcade Spot. Super Mario 64 DS is a high quality game that works in all major modern web browsers. This online game is part of the Arcade, Action, Mario, and Nintendo DS gaming categories. Super Mario 64 DS has 6 likes from 9 user ratings. If you enjoy this game then also play games Super Mario Bros. and Super Mario 64. Arcade Spot brings you the best games without downloading and a fun gaming experience on your computers, mobile phones, and tablets. New arcade games and the most popular free online games are added every day to the site.