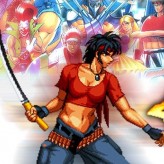 Choose a hero and pick a partner! Get into a tag battle against other fighters in the Battle of the Beast God tournament in Kizuna Encounter: Super Tag Battle! Switch character with your tag partner and make sure that neither of you gets knocked out!

Kizuna Encounter: Super Tag Battle is a retro arcade fighting game with a tag system. The story starts after the first Battle of the Beast God Tournament when a single fighter overpowered the entire game. Thus the second tournament included the new rule of having a partner. Will you and your partner be able to win the next tournament? Kizuna Encounter: Super Tag Battle features 10 playable characters, and several secret levels. Deal with an unknown threat and win the tournament! Remember to tag out if you’re HP is low!