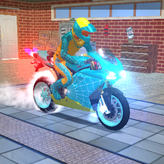 Hero Stunt Spider Bike Simulator 3D is an open world superhero-themed motorbike riding video game where you take control of a hero trying to solve various problems from rescue to pursuit. Although the game features superhero work simulation, the gameplay is actually just about riding a motorbike from point A to point B, or something similar. In the game, you can get various missions across the map, numbered according to their difficulty level. The game features a total of four different bikes, each with its own design and stats. Bikes can be purchased with the money collected from finishing missions, or by doing other miscellaneous tasks, like rating the game and its developers. Although most of the vehicles can be unlocked with cash, the amount is not specified so it's a bit hard to tell just how much the bike costs. Will you be able to complete all missions and collect all superbikes? Good luck and have fun.