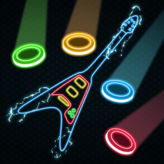 Are you a musically-inclined person that loves to play musical instruments and loves to listen to beats? Well, you came to the right place! Try out this awesome rhythm music game – Guitar Hero!

Guitar Hero is a rhythm music game released for keypad phones, Android, Windows, and ios devices by Glu Entertainment in late 2006. The gameplay is much more similar to its console counterparts such as the PlayStation and the Xbox, however instead of playing with five frets, you only get to play on three frets, so it’s much easier since you’re only going to look after fewer targets. Try to hit the notes and get the rhythms on time, do not hit too early nor hit too late as it might cause you to lose the game. So, get your rhythm and beat on time, and have fun!

Play Guitar Hero game online in your browser free of charge on Arcade Spot. Guitar Hero is a high quality game that works in all major modern web browsers. This online game is part of the Skill, Mobile, HTML5, and Miscellaneous gaming categories. Guitar Hero has 2 likes from 2 user ratings. If you enjoy this game then also play games Guitar Hero: On Tour and Neon Guitar. Arcade Spot brings you the best games without downloading and a fun gaming experience on your computers, mobile phones, and tablets. New arcade games and the most popular free online games are added every day to the site.